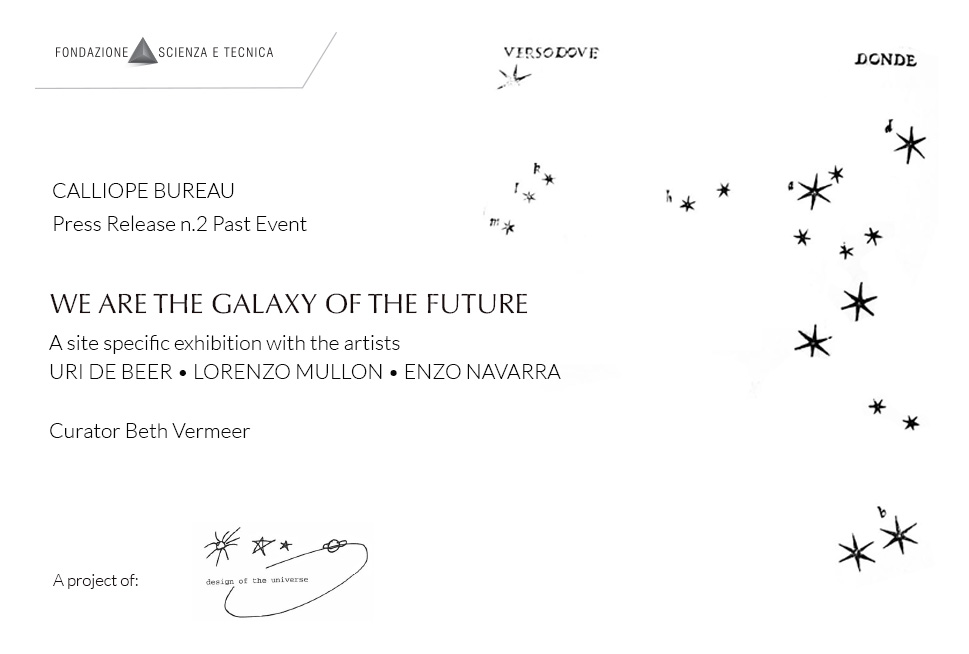 Florence, November 8th, 2017 – Last weekend in Florence, Italy, the interdisciplinary project “A Dialogue between Astronomy and Art”, based in the venue of the Foundation of Science and Technology, attracted all kind of sympathizers of the Outer Space. In the course of three evening events transversal conversations between scientists, artists, poets and musicians were stimulated by brilliant speakers. What however remains of this creative confrontation, is a small high quality exhibition entitled We are the Galaxy of the Future, a site specific setting in the Atrium of the Foundation and in the Conference Hall where the ingenious spirit of three artists like Uri De Beer, Lorenzo Mullon and Enzo Navarra try an unusual coexistence with the scientific collections of the Museum through their collective sharing of microcosmical exhibition spaces.

The project’s objective calls for the pleasure to individuate and to join common paths in both domains, in science and in culture, in order to promote a scientific heritage that thanks to the artists passes on to a different range of public, in the name of creativity. This is the show’s main thread that illustrates the concept in a site-specific exhibition lay- out designed by Beth Vermeer. Starting from Lorenzo Mullon’s painted galaxies, the visitor gets a chance to reflect in front of Uri De Beer’s digital paintings and sculpture, and ends up in the Conference Hall with Enzo Navarra’s mysterious lunar works.

For many years these artists of different generation, origin and artistic expression have enriched their research by studying the entropy of visions and perspectives of the Universe. Each of them focuses on a meeting point between the scientific thought and the alchemical everyday practice, an intriguing challenge to reconcile the research in the field of astronomy with human science and its practice through the action of art, music, theatre and poetry.

The exhibition itinerary initiates at the entrance of the Foundation where four imposing meteorites suspended from the ceiling, capture the visitors’ attention and curiosity. Lorenzo Mullon, artist and poet from Trieste, is inspired by certain celestial phenomena beyond the visible radiation of colours. Matching with fragments of historical cartography Mullon’s works are inhabited by marvellous creatures, reptiles, salamanders, scorpions, fauns and fairies, monsters and other protagonists related to the heritage of myths and legends.

His opus entitled Stellarium can be compared to the splendour of existing stellar phenomena in the cosmos, going beyond the question of their luminosity and temperature. The cycle leading from the stars’ death to the life of galaxies, is an index of eternal transformation and of the fact that everything gets renewed by sacrificing a part of itself. Mullon’s stellar fragments are also a reference of the Planetarium where the sky shows his nightly beauty on the vault of a room.

A showcase dedicated to the models of the rare collections of the Cabinet of Natural History is the ideal place for the art works signed by Uri De Beer that coexist in a perfect way with the objects on display, from the formal and chromatic point of view and also from the conceptual one. The Israeli artist presents six works of digital art printed on canvas that recall the beginning of the Universe.

Excerpts from the first chapter of the Genesis unite with the imagery of microscopic parallel worlds, the geometry of fractals in the nature, images from the human brain, cell activities and nanotechnology, blending with the Outer Space through Hubble Telescope. In Uri De Beer’s paintings we perceive a spontaneous fusion between the biggest and the smallest scales, approaching the nearest and the most distant worlds. Fractals enter into De Beer’s system like mysterious elements switching between our universe and infinite universes around us, beneath and above. Also his sculpture works are deeply related to Nature’s morphology. Circles and curved shapes are associated with the organic order of Nature and will always hide a secret. The sculpture pieces on display, prototypes of future monumental works, express the thought of an artist that rather reasons in terms of growth than of mechanical construction, preferring natural shapes to artificial ones.

And there is a third way to get closer to cosmology, the way Enzo Navarra has been following for years. The versatile artist from Lucania transforms an aseptic conference hall into a place contaminated by the magic of a blue and golden sky, and by the rare poetry of his October Harvest Moon. When artists talk about the moon, it is neither a question of language nor meaning. It is all about vision. Navarra studied the lunar ambiguity which is inseparably connected with the human spirit and so he integrated this essential feature into his research: a constant oscillation between the technical

practice that aims at exploring the unknown and the poetical one that continues its dream. On reading Giacomo Leopardi, the artist received the initial impulse to get engaged with a universal topic like the Moon and with the wealth of its semiosis. And Navarra answers in a typical Leopardian manner that reaches, like the Moon, our heart. His inedited moon work made for a special occasion – the International Observe the Moon Night 2017 – emanates a mysterious magic that had already been celebrated by Leopardi, his favourite poet, centuries ago. October Moon, a masterpiece in mixed technique, with gold leaves and organic wool on jute, merges with the language of scientists like a magic mirror of the present. There is no answer, if not inside the daily continuous practice they share: observing, searching, exploring, remembering, finding out. Meanwhile the Moon stays there.

The exhibition, conceived by Curator Beth Vermeer, Design of the Universe, can be visited until the end of November 2017 in the following opening hours: on Tuesday, Wednesday and Thursday from 10.30 am to 2.30 pm. On Saturday and Sunday from 10 am to 6 pm. Closed on Monday.

We are the Galaxy of the Future is the outcome of the collaboration between Design of the Universe and the Foundation of Science and Technology, Florence that hosts the show in its museum space, with the patronage of the City of Florence, of the University of Florence and with the participation of the Astrophysical Observatory of Arcetri.